There is an often an unseen reality in Manila – 25% of Manila’s inhabitants live in informal settlements, which are often considered as being unsuitable for human habitation.

From these areas, Baseco is a notable example of a sprawling large slum. Located next to outlet of the Pasig River, an official 2002 census placed the population of Baseco at around 47,000. This slum is dogged by many problems that include overpopulation, poverty, and overall poor living conditions. The area was ravaged by a fire in 2004, which aggravated the situation by rendering thousands of locals homeless.

But despite all the challenges that the people of Baseco face, their creativity and adaptability in the face of adversity is truly astonishing. While their surroundings may appear dirty and unkempt, the people that live in Baseco are full of colour and joy. Life may be difficult for the thousands of families that live in Baseco, but there is a distinctive will to push forward and fight against all odds to survive. 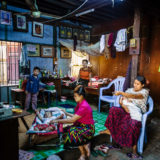 Capturing the Soul of Myanmar