Manila is consistently attracting foreign investors to its shores, boosting the capital’s economy and creating new opportunities or those Filipinos that inhabit the city. But while the capital keeps on expanding, the slums around it continue to be a persistent social issue.

Poverty and homelessness is on the rise in Manila’s slums, and the population of certain slum areas is only set to increased significantly in the coming decade. One of these areas is paradoxically called Happyland, a district that is marked by smoking rancid mountains of rubbish emitting methane gas. People living in Happyland have no access to basic sanitation, running water and quite often education. Children often spend their time rummaging through the piles of garbage for ‘buried treasure’.

Be it rags or pieces of cloth, discarded food scraps, or anything else that can be fashioned into a reusable item, nothing is wasted in Happyland. People recycle chicken and other meat by boiling it and selling it to hungry families as what is locally known as ‘pagpag’.

The population of Happyland has swelled to 12,000 in the last couple of years, and disease and malnutrition continue to claim the lives of the weakest. But despite all the problems and extreme conditions that the residents of Happyland face on a daily basis, the people are very strong – they have to be, otherwise they would not be able to survive.

Filipinos will keep on fighting for the future of their children and their lives, and it is this reason that makes Filipinos such incredibly dedicated workers all over the world. 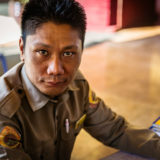 Inside the secret world of Valletta’s Cloistered nuns