Llamas are domesticated animals that have been around humans for numerous centuries. They originated from South America together with the Nazca culture in around 200BC, but are more closely tied with the later Inca civilisation. And after all this time spent in South America, llamas are slowly conquering the world with their strength and gentle spirit.

While it is very true that llamas are still crucial as transportation and work animals for people in Peru and Chile, they have taken on a more healing role in other parts of the world. Be it for the therapy of hospital patients, trekking tours around mountains, and to provide company in old people’s homes and nurseries, llamas have truly captured people’s hearts all around the world.

Llamas also have a beautiful home in the picturesque city of Bolzano in South Tyrol, Italy. Walter Mair has been captivated by these magnificent beasts for over 15 years, and has been breeding them at the Kaserhof – the largest llama farm in Italy.

During February of 2018, Walter decided to embark on a lifelong dream to undertake the ‘Via Romea Germanica’, a medieval pilgrimage route that runs from Germany all the way to Rome. Walter’s journey started from Bolzano, with a total distance of 1000 km to reach the Vatican City. He set off from his farm on the 20th February with two friends and three of his strongest llama stallions.

However, the journey was a grueling one for both men and llamas. Finding an appropriate place to sleep was difficult each night, as well as finding the right feed for the llamas throughout the pilgrimage. In addition, after walking on approximately 300 km of asphalt, the llamas starting feeling the sting of the hard ground on their feet. In order to counter this, Walter found a saddler in South Tyrol to create special leather walking shoes for the llamas, which made their journey more comfortable.

The entire journey took around 7 weeks to complete, with the groups’ arrival in St Peter’s Square on the 11th April 2018. Walter, his friends, and his 3 llamas were granted an audience with Pope Francis on the same day in Rome. Pope Francis welcomed his fellow South American friends warmly, and blessed the 3 llamas, in front of a large crowd of well-wishers.

I am a passionate animal lover, and found this story to be truly heart-warming. I decided to visit Kaserhof myself in order to meet Walter and his herd of llamas. I was immediately welcomed by Buffon, who captured my attention and imagination.

Buffon has a very exceptional personality, and it is clear that he is the untouchable leader of his herd. His determination is impressive, and I am sure that he had a big influence on the success of the group that completed the pilgrimage to the Vatican City. Buffon shined very bright when he arrived in St Peter’s Square, and also managed to catch the eye of Pope Francis.

I was also very fortunate to share a close encounter with another llama that made his way to meet the Pope. Shaqiri was very quiet as I was shooting Buffon, but he slowly plucked up his courage to come and meet me. 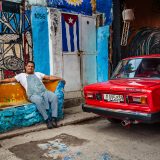