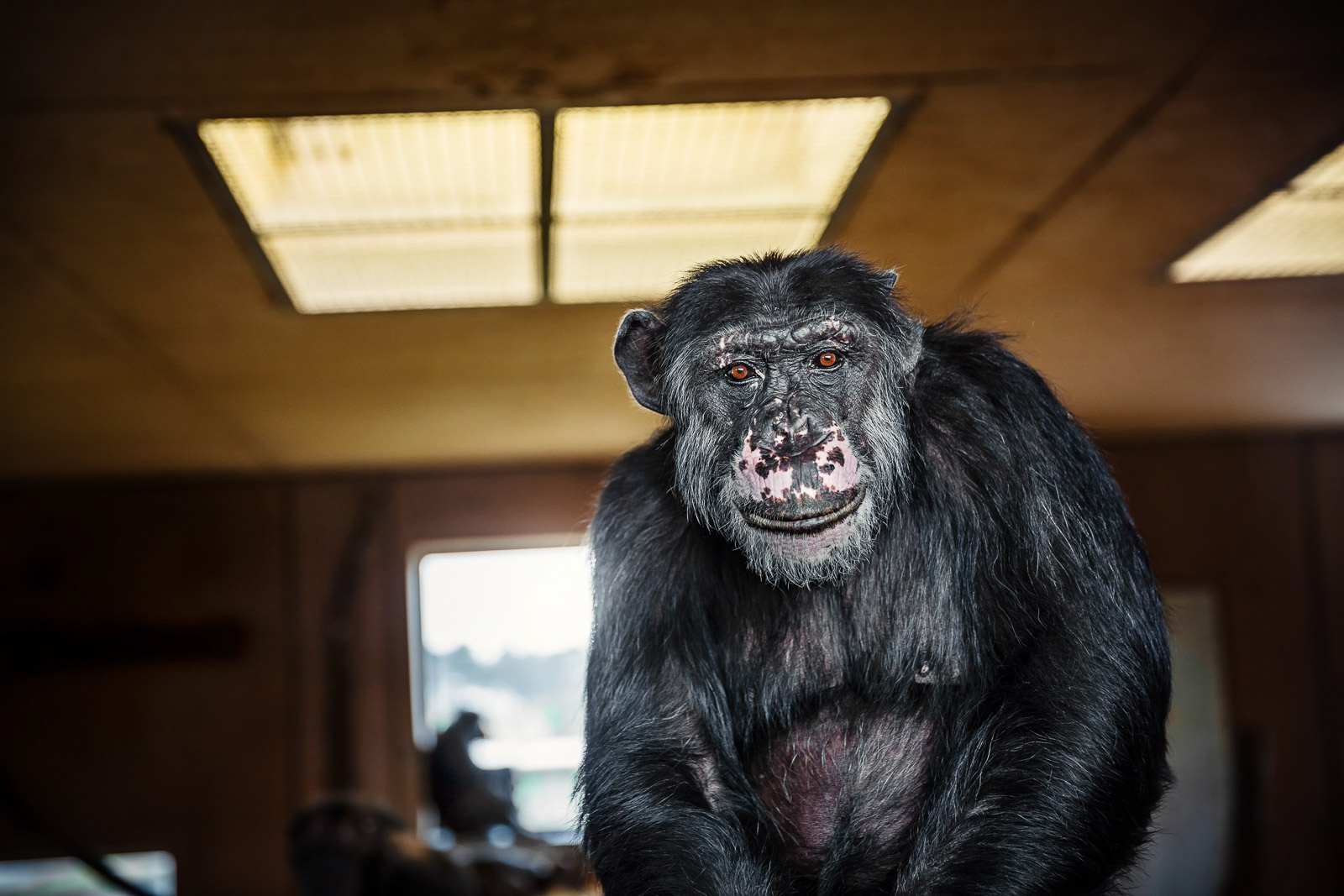 The First Ever World Chimpanzee Day  will be celebrated this July 14th, 2018!

Chimpanzees are listed as endangered on the IUCN’s Red List.

Chimpanzees are our closest living relatives. We are around 98.6 %  of the same DNA in our human genome.

These incredible animals are under threat as a result of habitat loss, population fragmentation, illegal wildlife trafficking, bush meat hunting, disease and trading in the pet industry.

Due to the close genetic relationship we have with this fascinating species, Chimpanzees are unfortunately still captured in the wild to this day for use in different medical research facilities around the world. This practice is also supported by some well-known Western Airline Companies.

During the two decades after the start of the AIDS epidemic in the 1970, the demand for chimpanzees to be used in animal research grew significantly. Mankind were searching desperately for effective vaccines and treatment for diseases such as the HIV virus and Hepatitis.#

From Africa to Austria

Monkey catchers combed through African rainforest to trap baby chimps for research, using incredibly brutal methods. Chimps are highly intelligent creatures that are up to seven times stronger than humans. They form complex social relationships in the same way that humans do, with the mother-child bond being very intense. Infants cling to their mother’s belly for the first three years of their life, and continue to ride on their backs for an additional four more years.

The only way to catch the baby is by shooting and killing the mother. But chimps live in family groups that stand together when one family member is endangered. It is estimated that to catch one baby chimp, up to 20 adults would be killed defending the infant.

Packed into closed wooden transit boxes, many infants do not survive the journey from Africa to different research facilities from all around the world.

Upon their arrival, the infant chimps are locked in cages as big as 1.5m by 1.5m. The cages are hostile, with wired mesh flooring to make cleaning easier. They are generally kept in complete isolation and are subjected to harrowing tests in the name of science.

Immuno Lab, a research facility first based in Vienna and later relocated to Ort an der Donau, played a key role in the exploitation of chimpanzees for research in Europe in the 1970s.

When the first chimps were transported in the 70’s to this research lab, crowds of people were demonstrating in front of Vienna‘s town hall.

Jane Goodall, the famous primatologist and UN peace ambassador, was personally occupied in a cage to express vehement protest about such practices, and has since followed these events closely.

The year of change

1997 would eventually become a year of big change in life for all these captivated and tortured chimpanzees at Immuno Lab. The company was taken over by Baxter pharmaceuticals, which immediately stopped all experiments on chimpanzees.

Baxter had a strict policy that prohibits the use of chimpanzees for testing, so they committed to releasing all captured chimps to a sanctuary.

The process for building such an enclosure in Gaeneserndorf, a town about 20km northeast of Vienna, was complex and was finally completed in 2011 after the Austrian government turned to Gut Aiderbichl, a non-profit organisation that specialises in animal sanctuaries.

In this year the doors were opened for the first time, which was a remarkable moment as the first chimps were welcomed to one out of eleven amazing outdoor enclosures. They were given back a piece of the once traumatically lost natural “paradise”.

One has to remember that these highly social animals spent their entire life in isolation. As such, the entire process of resocialisation was very challenging, and is still quite daunting today. However, these chimps have made enormous strides towards their recovery, with the assistance of highly qualified caretakers and their enrichment programmes.

Four dedicated, hard-working caretakers engaged by Gut AIderbichel are managing this sanctuary and adore these chimpanzees, and are fully committed giving them the best possible chance at a happy life that they cannot live in the wild.

Many Thanks to Gut Aiderbichel for having made such a big human committment and achievement towards animal rights and animal protection possible!

Even though European countries do not accept to use Chimps for medical testing anymore, illegal trafficking for use in biomedical facilities is still alive. Countries such as China and Malaysia are still heavily dependent on baby chimps for experimentation, and some European countries illegally smuggle them into their borders using false documentation.

The UN Environment Programme estimates that at least 3,000 great apes, including orangutans, gorillas and chimpanzees, are lost from the wild every year for medical research. 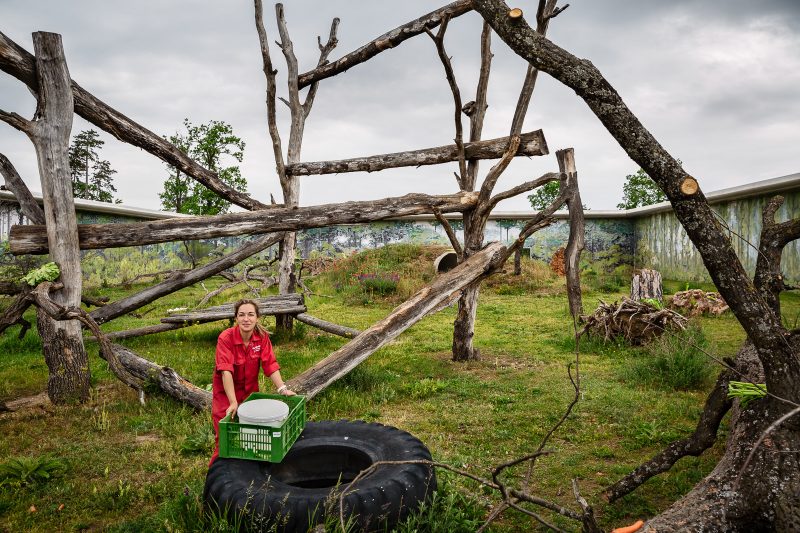 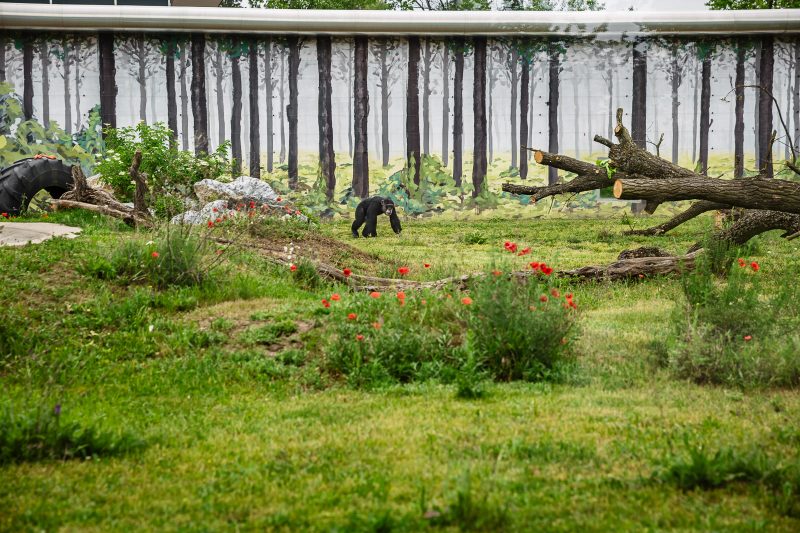 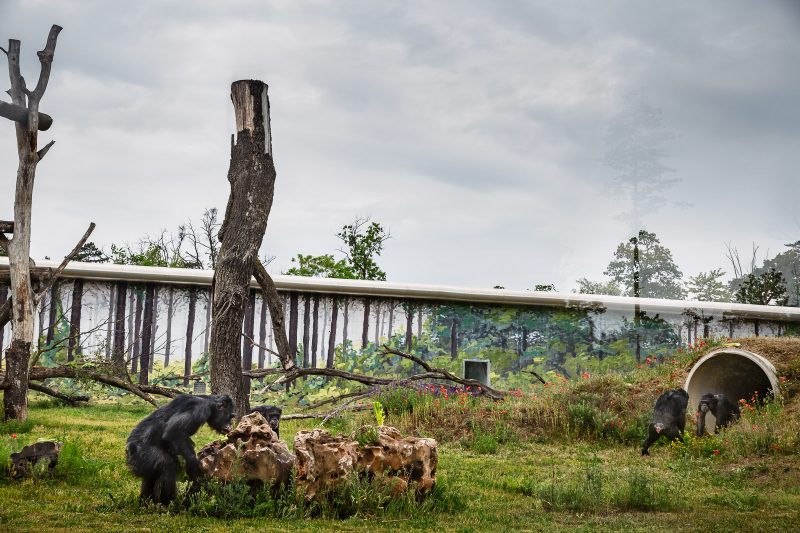 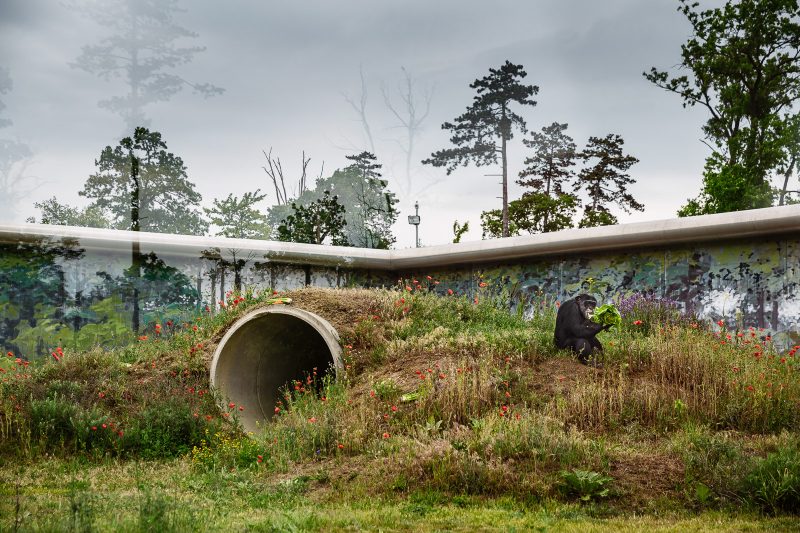 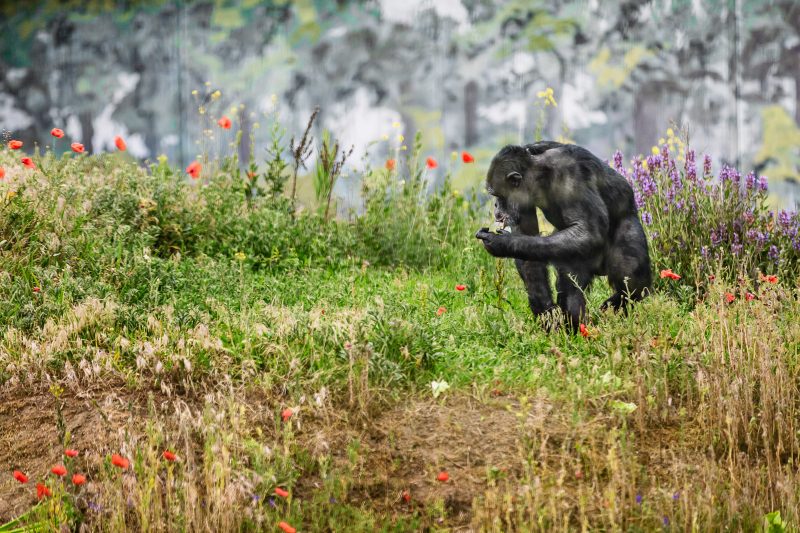 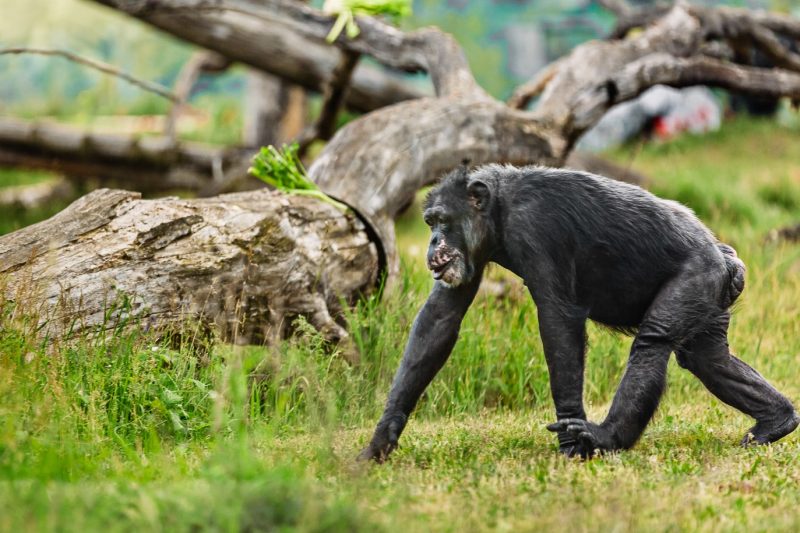 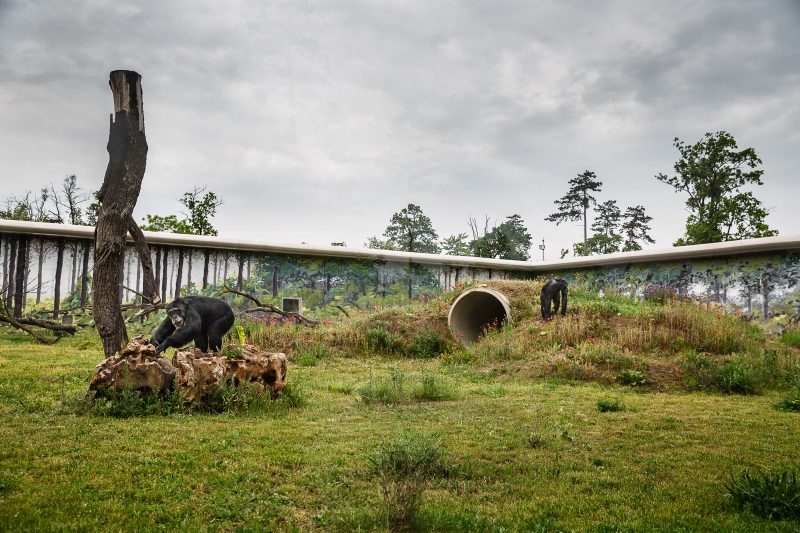 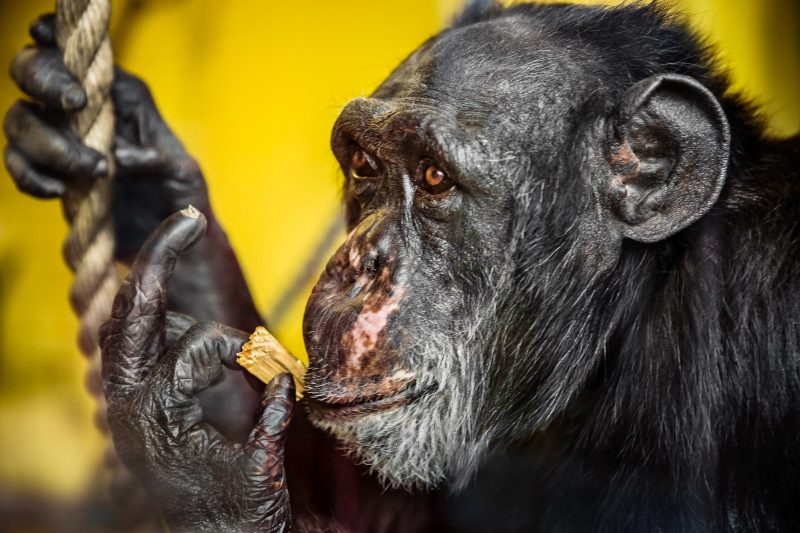 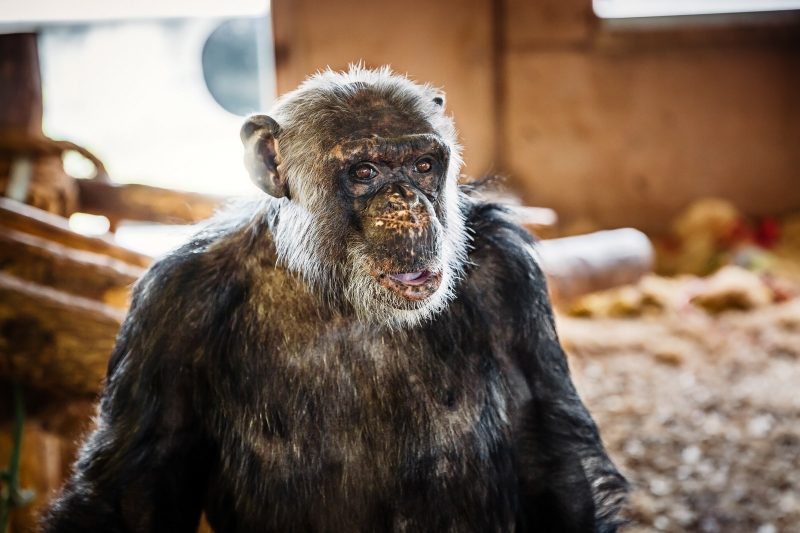 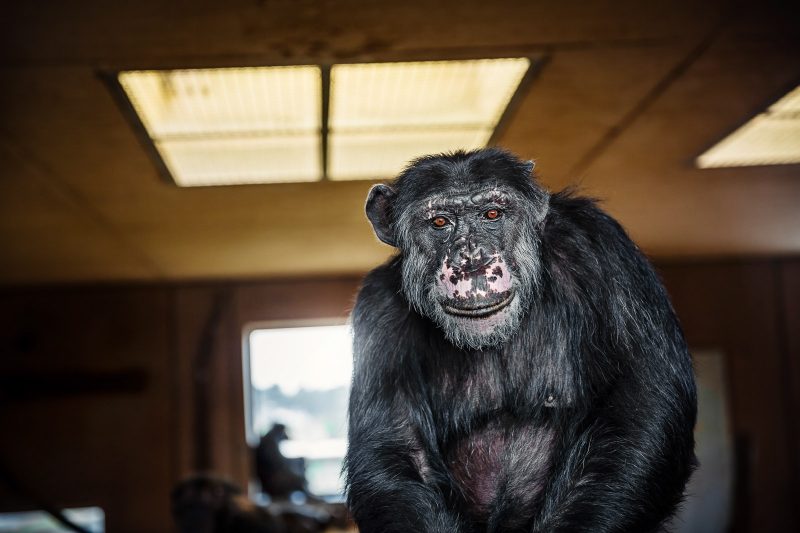 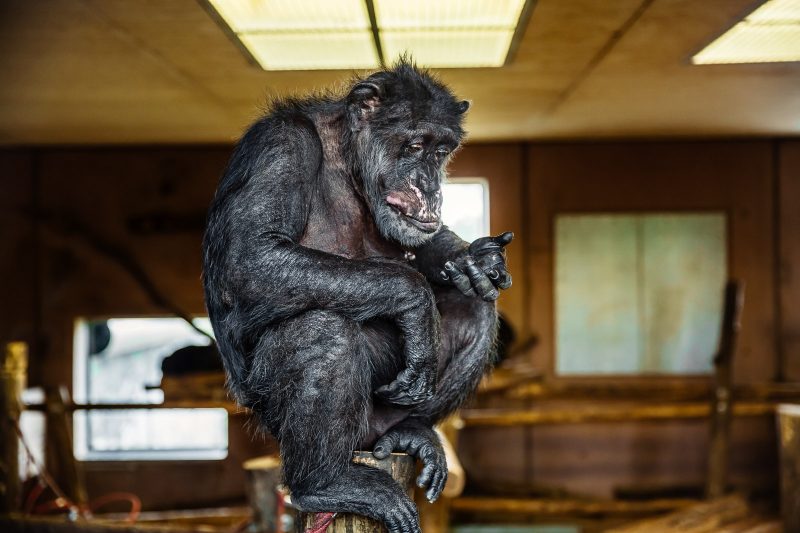 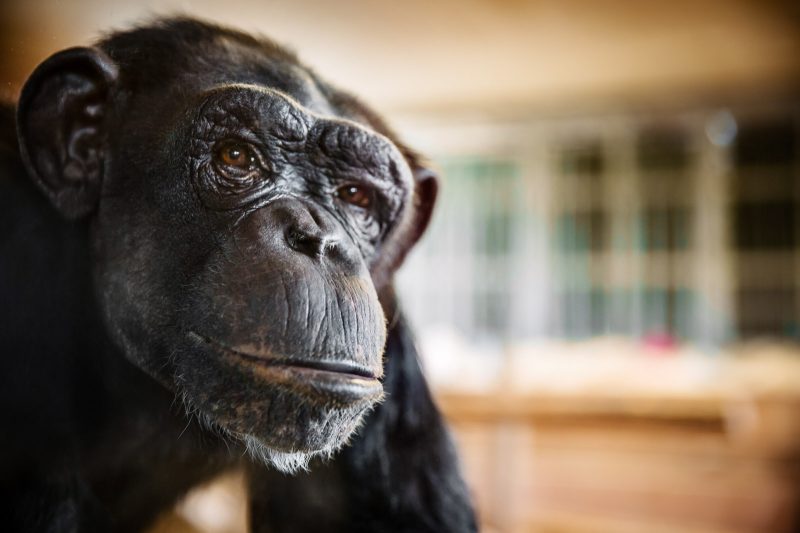 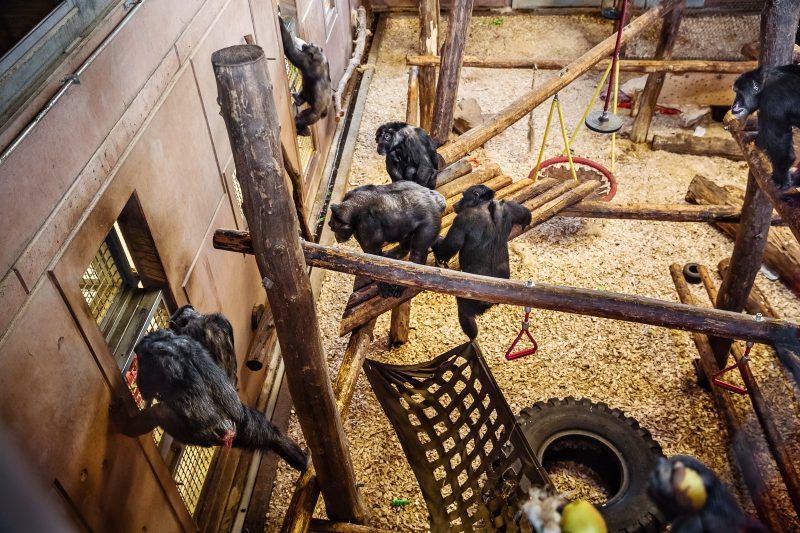 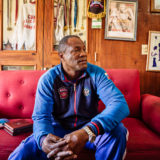 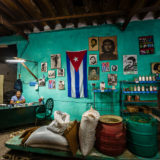